Posted April 17, 2018 by Marshelle Johnston in Uncategorized 1388 0 0
It’s 2 days later and I still can’t believe it’s over! 5 months of preparation and in one day it was all over. I am proud of how I looked and performed, but it is frustrating that I didn’t place. It had been 2 years since my last show, and now I remember why I took such a hiatus!
For the last month in between my shows, I felt like a shell of a human just going through the motions of everything I knew I had to do each day. Some people may be able to live this lifestyle all the time, but it’s definitely not for me. Like I said, I am proud of the package I brought to the stage, but the restrictive lifestyle, regimented eating, overtraining, constant exhaustion and irritability really was miserable. I tried not to complain too much since it was all voluntary, but after eating a banana this morning on my way to the gym for deadlift day (my favorite activity), I am sure this was my last show.
Peak week:
Wednesday and Thursday were the same as they were for my first show this season, so I was water loading and drinking 2+ gallons each day. Friday I drank water up until check in at 5pm and then it was none until after pre-judging the following day. I also cut out all sodium on Friday. I had a full day of work and meetings on that day, so at least that kept me distracted from how hungry I was! At this point, I hadn’t had any carbs in 2 weeks! Urghhh…
So on Friday, the real fun began. Once I was finished up with work, I headed to the venue for check-in. I was winding all over the hotel trying to find where I was supposed to go, and then the second challenge was finding a bathroom to change into my suit. You have to wear your bottoms for check-in so they can make sure they are within regulations. I finally invade a chiropractic conference since theirs is the only bathroom I seem to be able to find, and start to change. THE SUIT BOTTOMS COMPLETELY FALL APART as I am trying to put them on, so I literally have them half hanging off of me under my sweatpants.
I didn’t want to be disqualified, so I planned to just hold the broken side together when they checked. I get to the check-in desk and nearly have the guy rolling on the floor with how I told the story of busting out of my pants. I made it through check-in and then get a phone call from my mom telling me they are trapped in Kansas because I-70 is shut down due to the blizzard rolling through causing a complete white out. I’m thinking “great, my parents are stranded 4 hours from me somewhere in Kansas, my pants won’t stay on my body, and I now have to spend all night tanning AND fixing my suit. Rude.
So I head to Hobby Lobby in hopes of finding a solution that will keep me from being the Youtube sensation who had the most epic wardrobe malfunction of all time. I get to the store and find some moldable wire and E6000. 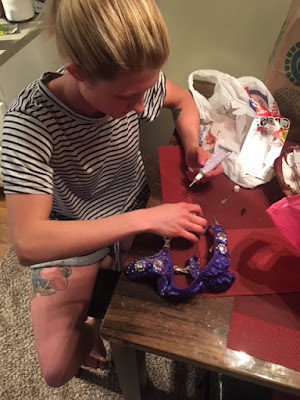 I can’t say this is the activity I pictured doing the night before my show! 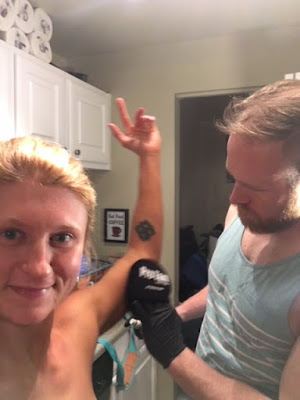 The glue took awhile to set up, so we started the tanning process in the meantime! It was 4 coats Friday night and 3 coats Saturday, but it worked and I was DARK! Don’t worry, we put my puppy’s potty pads down to absorb the mist! #resourceful 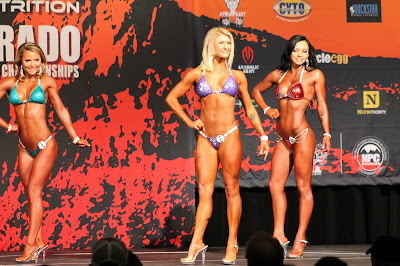 These pictures are all from pre-judging, which is where they do most of the comparisons and judging. The finals are really just for the individual walk and awards. 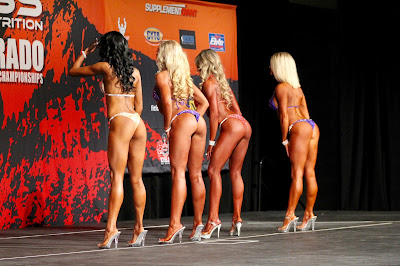 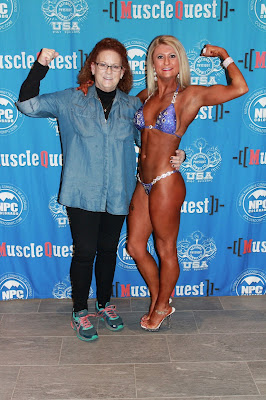 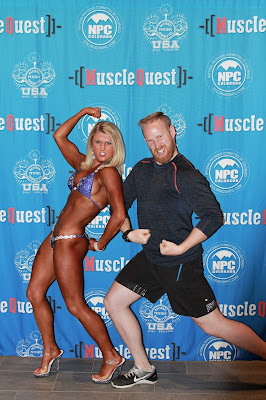 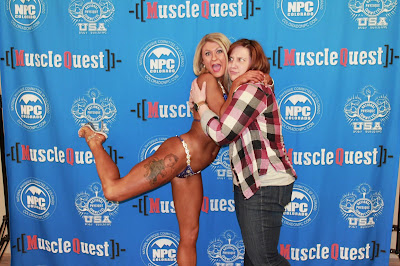 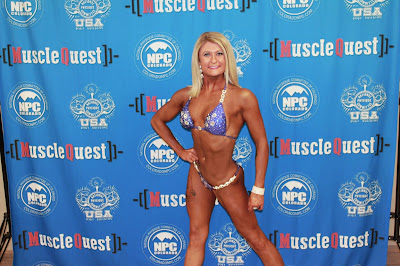 Finals:
So as you can see, it all worked out, but it was a stressful weekend to say the least! My parents missed pre-judging since the highway didn’t open back up until about 9am Saturday. They met us right after pre-judging ended, so we headed out to Bad Daddy burgers for a mini cheat meal before finals!
I got in a brief nap during the 4 hour break between shows which helped a ton! I wish they just went straight through since bikini ran last in both shows, and it made for a REALLY long day! Just to put it into perspective, the competitor meeting was at 8:15am and we didn’t finish for the day until 9:30pm.
I went on stage for pre-judging around 11am and was in both a novice class and an open class. I was in novice because I had never placed 1st in an NPC show and then open is for all bikini competitors. After this it was mostly sitting around until 4:30pm when finals started. Some of my awesome clients showed up for the event, and I felt so bad because of how long the show lasted! I did have reservations for dinner at 8pm, but it very quickly became evident we weren’t even close to my category.
Once we did finally get to awards, I was hopeful I would make top 5 in both my categories, but was sure I would in novice. Unfortunately, I was wrong on both accounts. I didn’t make top 5 in novice or open, but I tried to look past the results and discouragement and focus on my personal win. I looked better than I have for any of my other shows, and I had an amazing posse of support there to cheer me on! Since the sushi dinner plans fell through, a few of us went to Illegal Pete’s for tacos and margaritas instead! Gotta love $6 super strong margaritas!
It was a fun weekend, but I am very much relieved it’s over! Now back to the heavy lifting that built me this booty! ;p